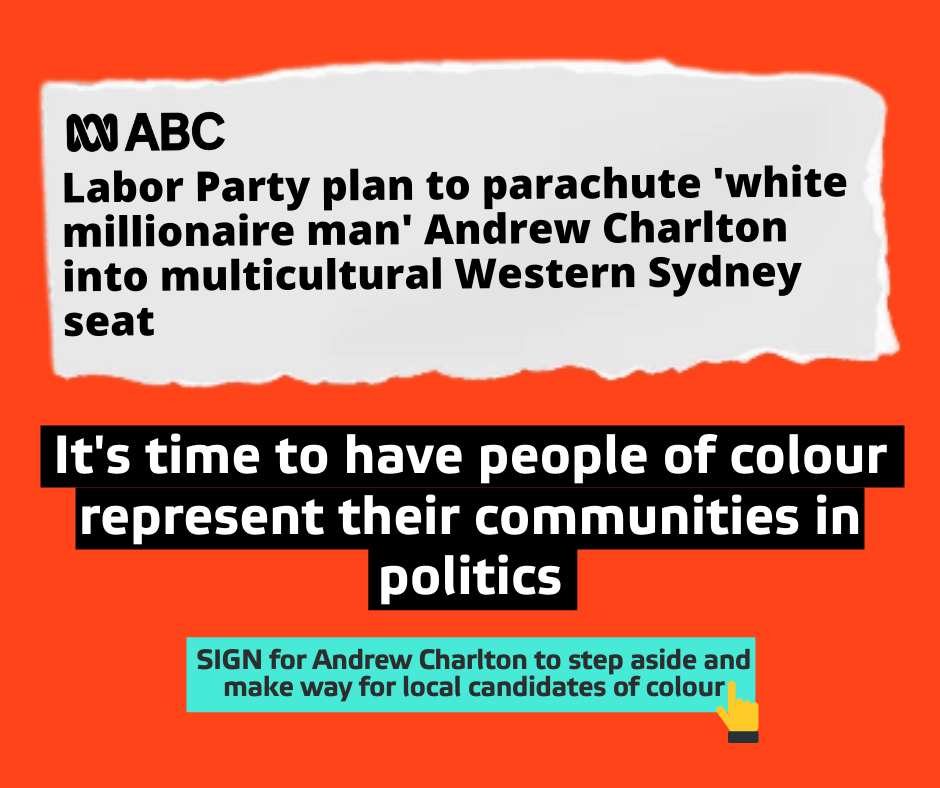 Andrew Charlton step aside for grassroots candidates of colour in Parramatta

The Australian Labor Party just announced it wants to parachute white wealthy man Andrew Charlton into one of Australia’s most multicultural seats, Parramatta, over grassroots candidates of colour.

What’s worse is that this comes at the cost of supporting grassroots candidates of colour like Abha Devasia, an Indian immigrant and lawyer who has been advocating for workers’ rights or Durga Owen a solicitor and law lecturer of Tamil descent.

Parramatta is a highly diverse electorate.  60% speak a language other than English at home and 70% have both parents born from overseas.

Yet, Andrew Charlton lives in the Eastern Suburbs and he would only move to Parramatta from his ​​$16 million home if he is to be elected. He’s being given this opportunity because of who he knows and who he’s friends with. His opportunity comes at the expense of the candidates and people of colour who are actually engaged with the community and connected to the people of Parramatta.

Our politicians should reflect the communities they represent. People of Colour should have equal opportunity to represent communities of colour.

The fight is not over though – we’ve got an opportunity. The ALP National Executive – the party’s governing body – will open nominations for the preselection within hours. We must call for representation from candidates of colour.

Can you sign this petition and call on Andrew Charlton to show true leadership and step aside to make way for grassroots candidates of colour?